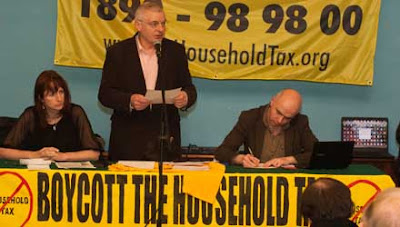 This post carries a health warning. If you have not at some point been a member of one of the organised parties of the far left, such as the Socialist Party or the Socialist Workers Party or, going back a bit, the Workers Party, then by reading this post you are taking an innocent first step into a strange and dangerous world.

You’re the folksinger beard
you spent years trying to grow;
the Afghan jacket you used to wear
on Bank Holiday bus trips to Galway.
But the complete set of Bob Dylan LPs
in the corner of your living room
is not telling the truth.

When you read Animal Farm, it’s to see
how the pigs did it.
Whatever the Revolution demands;
you are what it will get.
Your loudest supporters,
those just out of nappies, or refugees
from the Central Mental Hospital.

The inconvenient turn up accused
of attempted rape, pilfering funds…
you leave it to others to execute the details.
Anyone who questions the verdict
can take their case to the committee
that never meets.

You sleep soundly, dream
of the portrait that’ll decorate
every town centre, every crossroads
from Donegal to Waterford:

that folksinger beard
you spent years trying to grow
finally come to heroic fruition.
Below are some extracts from an article I came across today via Facebook. It details the Socialist Party leadership's response to the resignation letters of four longstanding members. Having read this article a couple of times, it is obvious now to me that my poem 'Dear General Secretary' contains not a word of truth. As my penance, I am going to spend the next several days standing in a cupboard with a brown paper bag over my head.

“On Sunday July 7 an aggregate meeting of the Socialist Party (Committee for a Workers’ International Ireland) was held in Wynn’s Hotel, Dublin to discuss the resignation of four comrades…

Notably these comrades had individually emailed letters of resignation to the party staff. Moreover those resigning had occupied positions of considerable importance: Jimmy Dignam had worked in Joe Higgins’ office in parliament; Richard O’Hara had been branch secretary in the Swords branch in north Dublin during the Clare Daly debacle which dogged the SP throughout the second half of last year and worked full-time in parliament; Andrew Phelan had been involved in forming the independent Fightback group in the Association of Secondary Teachers, Ireland (outside party stricture); and Megan Ní Ghabhláin had similarly been involved in organising a militant opposition to Croke Park 2 in the Irish National Teachers’ Organisation, which is one of the two largest teachers’ unions in Ireland. Hence their resignations could not pass without mention…

When I arrived at Wynn’s on Sunday I began summarising the most salient arguments of O’Hara’s letter - as his arguments were the most developed - as soon as I received a copy. Summarisation was compelled, as members were not allowed to keep their copies - the absurdity of having a ‘democratic discussion’ regarding the resignation letters, while not being allowed to view the letters beforehand and retain them afterward, unfortunately seemed to be lost on the rest of the room. Clearly the intention of holding the meeting was to reassure the SP’s uninformed membership of the infallibility of the leadership and pre-empt any further dissension...

With 60 members in attendance, the meeting began with a 40-minute lead-off by Kevin McLoughlin, the SP general secretary. McLoughlin’s talk did not address primarily the content of the resignation letters. Instead, as was his stated intention, he focused on the ‘Irish context’ in which the comrades resigned (as opposed to the hallowed Egyptian context). In his view the decisions to resign were only explicable against this background: the difficulty of party-building since the crisis, the collapse of the United Left Alliance (ULA),  the failure of the Campaign Against Household and Water Taxes (CAHWT) to prevent the implementation of the Property Tax and the rollback of trade union opposition to ‘Croke Park 2’ represented by the Haddington Road agreement…

When the floor was opened for discussion, the circumlocutions of McLoughlin gave way to a slew of vulgar denunciations. In general, I will not waste the reader’s time chronicling who said what exactly; a worthless exercise, given that it all congealed into a droning three-hour morass of philistine pontification.”


The full article can be read here http://cpgb.org.uk/home/weekly-worker/972/socialist-party-ireland-not-for-the-public-domain
Posted by Jonathan Swift at 14:57