Former Lord Mayor of Dublin, Dermot Lacey, To Speak At Inaugural Conference On Why The Poetry Of Kevin Higgins Is Crap 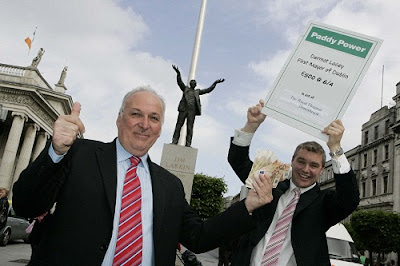 Labour Party Councillor for Dublin City Council's Pembroke Ward, Dermot Lacey (pictured left) is a fanatical moderate of the Social Democratic centre who makes sure that things that were going to happen anyway get done and dusted in the driest possible way. Without people like Dermot Lacey the world would remain exactly as it is.

I have no idea who the gobdaw beside him with the placard is. But said carrier will no doubt be appointed Junior Minister for Turf and Tourism in the Fine Gael-Fianna Fáil-Labour-Sinn Féin-Finian McGrath-Michael Lowry coalition of 2025, before being fed to crocodiles in the election after that. To paraphrase Kurt Vonnegut, so it generally goes.

Yesterday Dermot Lacey had what, for a fanatical moderate of the Social Democratic centre, must qualify as a pretty thrilling day. Following the vote on the Abhortion Bill, Dermot leapt onto Farcebook with what, for a Social Democratic centrist, can only be called enthusiasm. Dermot, with his usual fanatacism, took issue with the six pro-choice T.Ds who voted against the bill because of what they believe to be its draconian restrictiveness and its undeniable criminalisation of women who obtain abortions outside the terms laid out in the bill. In a stunning rhetorical flourish Dermot had these devastating words for Clare Daly, Joan Collins, Mick Wallace, Richard Boyd Barrett, Joe Higgins and Luke 'Ming' Flanagan:

"Sure they only know what they're against."
Lacey is well known as perhaps the Irish Labour Party's greatest polemicist. It is rumoured that Labour Chief Whip Emmett Stagg gets to sleep every night by endlessly re-reading Dermot Lacey's Facebook updates.

When I first heard that the six T.Ds were to vote against the bill, I wasn't sure that it was the right thing to do. There are certainly those on the sad Left who are congenitally incapable of saying yes. However, doing so  made it possible for them to raise the issues which the bill doesn't deal with in a way that would not have been possible had they voted for it. Their statements make a lot of sense.

Clare Daly said:
“In the absence of a referendum to repeal Art 40.3.3 of the Constitution – for which we call – we were willing to support legislation in line with the X Case Ruling of 1992. This Bill however, will put more obstacles in the way of access to life-saving abortions than are required by the Constitution.
This legislation is happening in the wake of the sad death of Savita Halappanavar. Yet the Fine Gael – Labour Bill, by defining and giving legal protection to ‘unborn human life’ from the moment of implantation until delivery, will not prevent similar deaths. It will make terminations illegal during an inevitable miscarriage while there is still a foetal heartbeat. If a woman gets an infection in such circumstances, doctors will have to delay a termination until her life is at risk. This was what happened to Savita Halappanavar – and the same could happen again under this Bill.”
Richard BoydBarrett said:
“Defining the ‘unborn’ in this way – for the first time in Irish law and unique in Europe – also excludes fatal foetal abnormality as grounds for abortion. This will force women whose pregnancies will inevitably end in tragedy to go full term or travel overseas for terminations.
Yet none of this is required by the X Ruling or the Constitution. It is a pandering to those who oppose abortion on any grounds – and who are prepared to see women die rather than allow life-saving terminations. It is particularly galling that Labour are promoting this as a Bill that will protect women’s lives, when it will do nothing of the kind. It is doubly ironic that they are supporting this reactionary Bill having opposed the Daly Bill on grounds that it was not sufficiently radical.”
Joan Collins said:
“Abortion will remain a criminal offense under this Bill, with the threat of a 14 year sentence for women and their doctors – including women who use abortion pills. Combined with the new requirement on doctors and hospitals to justify their decisions for terminating a pregnancy, this will put pressure on doctors to delay terminations until there can be no dispute that a woman’s life is at risk – by which time it may be too late.”
Mick Wallace said:
“For women who are so desperate that they would consider suicide rather than continue an unwanted pregnancy, the Bill will compel them to an examination and assessment by at least three practitioners and possibly six. This includes an obstetrician – who has no training in assessment of suicide risk. The government’s own Expert Group Report said a maximum of two doctors was enough. Yet Fine Gael and Labour are putting obstacles in the way of despairing women, forcing overseas those who are able to travel, in order to placate the anti-abortionists in their midst and the anti-abortion minority in Irish society.”
Luke Flanagan said:
“The government says the Bill brings clarity for women and doctors. But that ‘clarity’ spells out that  a woman’s life must be at risk before a doctor can intervene to terminate a pregnancy even where the demise of the foetus is inevitable. The perverse requirement in 40.3.3 that a doctor must allow a medical condition that is not in itself life-threatening – such as inevitable miscarriage – become potentially lethal before they can perform a termination, is unnecessarily retained in this Bill.”
Joe Higgins said:
“The Bill makes no provision for abortion to protect a woman’s health, or for cases of rape and incest, or where a woman regards it as being in her best interest to end a pregnancy. We will be calling for the repeal of this Act, and for the repeal of Art 40.3.3 of the Constitution to provide for the needs of women in Ireland for abortion services to be available close to their homes.”

I've not much doubt that, as Ireland's abhortion laws continue to be modernised under pressure from reality, these six T.Ds will be on the correct side of the argument every step along the way. The same cannot be said of Dermot Lacey, because 99.99% of the time Dermot does whatever the Labour Party leadership tell him to.

He did once bravely defy the Labour Party leadership when, in 2003, he voted in favour of increasing domestic waste charges on Dublin City Council. At the time Dermot was Lord Mayor of Dublin which will, we can be sure, be mentioned in orations at his funeral as the high point of his existence. Since I first clapped eyes on him at the January 1983 Labour Youth conference at Liberty Hall, Dermot Lacey has been saying a dull but, for him, orgasmic yes to the Labour Party leadership. He was an enthusiastic supporter of the Fine Gael-Labour coalition of 1982-87, the government which shambolically allowed the legislation facilitating the 1983 anti-abhortion ammendment to pass through the Dáil

This being the case, I felt obliged to reply to Councillor Lacey's gibe. I said that this comment was a bit rich coming from someone who had spent most of his life being a bag carrier for Ruari Quinn. 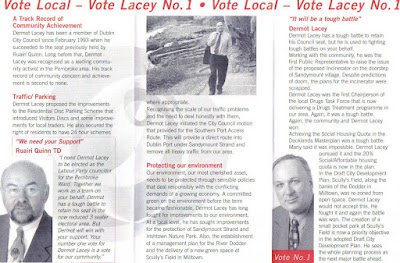 I may have used slightly more colourful language than that. And I may have implied that the bags Lacey carried for Ho Chi in fact contained Quinn's testes. But the point stands. Dermot Lacey shot back that my post, on Facebook, was "ignorant", which is fair enough - the phrasing was rough - he went on though to type the immortal words:
"and your "poems" are crap too."


By combining political opinion and literary criticism in this inciteful way, the former Lord Mayor of Dublin is joining such giants as Socialist Pary MEP, Paul Murphy, and Galway Socialist Workers Party.

For Galway Socialist Workers Party's take on the poetry of the revisionist dog Kevin Higgins
http://hurryupharry.org/2008/07/22/the-socialist-workers-party-turns-poetry-critic/

August will see the first Political Conference On Why The Poetry Of Kevin Higgins Is Crap. It will take place at a disused funeral parlour somewhere in the Midlands. Keynote speakers confirmed to date include Dette McLoughlin of Galway Socialist Workers Party, Paul Murphy MEP, Niall Farrell of Galway Alliance Against War and Councillor Dermot Lacey. God rest their souls.

Those attending the conference can buy copies of my books here http://www.salmonpoetry.com/bookshop-search.php