Ted Grant was born Isaac Blank in South Africa in 1913. He spent most of his life in Britain and was a key leader of the British Trotskyist movement, a founder of the Militant Tendency which grew to be, by the mid-1980s, perhaps the most successful Trotskyist organisation in history.

Ted died six years ago this month. You can read his Guardian obituary here http://www.guardian.co.uk/news/2006/jul/27/guardianobituaries.southafrica

Ted was always predicting another 1929 style economic slump. It's ironic then that in the same issue of The Guardian in which his obituary appeared, there was an article about the record profits which a certain British bank had just announced. That bank  was Northern Rock, which was one of the first to topple when the present crisis began the following year.

From 1982 to 1994 I was a member of the organisation myself, at first here in Galway where I was a Militant supporter within Galway West Labour Youth and later in north London, where I was chair of Enfield Against The Poll Tax. For my trouble, I was expelled from the British Labour Party in 1991.

When I heard about Ted's death, it inspired this poem http://www.nthposition.com/deathofa.php

The poem is also available in my 2008 poetry collection Time Gentlemen, Please which can be purchased directly from the Salmon Poetry site. http://www.salmonpoetry.com/details.php?ID=35&a=108
Posted by Jonathan Swift at 18:11 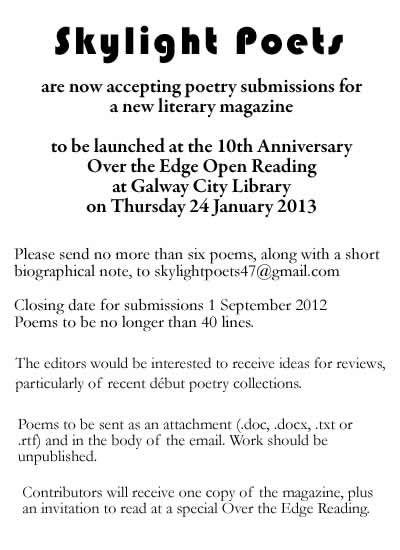 My poem about Juliet Poyntz is today discussed in some detail on the very much right of centre American website Neo-neocon here http://neoneocon.com/2012/06/18/juliet-poynz-changer/

Poyntz was a founding member of the Communist Party U.S.A. She became disillusioned with Stalinism and was, apparently, 'disappeared'  by Soviet agents in New York City in June 1937. Her murder happened at a time when the likes of George Bernard Shaw and Lillian Hellman (to name just two) where loudly telling anyone who would listen what a great guy Stalin was.
Posted by Jonathan Swift at 23:41

Stephen Byrne reviews Mentioning the War
on his very interesting website The Ranting Beast
http://therantingbeast.com/book-review-mentioning-the-war-by-kevin-higgins/
Posted by Jonathan Swift at 15:30 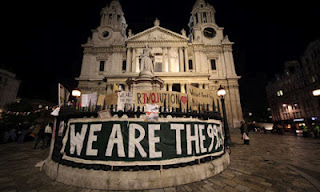 Email ThisBlogThis!Share to TwitterShare to FacebookShare to Pinterest
Labels: A Brief History of Those Who Made Their Point Politely And Then Went Home, Hilary Aked. The Boy With No Face, Occupy London

Facebook page for my new book 'Mentioning the War'

I have a new poem on Irish Left Review.
It was provoked by the reaction to the Mick Wallace V.A.T. issue.
http://www.irishleftreview.org/2012/06/13/anatomy-public-outcry/

Mick Wallace ran on the platform of 'A New Politics'. He was a T.D. for only 14 months when he co-sponsored (with Joan Collins and Clare Daly) the bill to legislate the the X-Case. It was the first attempt to legislate for abortion in Irish history. Seems like a new politics to me. Given that in the 20 years since the X-Case not a single T.D., not one, had the courage to attempt to legislate on this issue. Just saying.
Posted by Jonathan Swift at 10:57

After the Dublin launch, The Stinging Fly review

REVIEW by Philip Coleman in Summer 2012 issue of The Stinging Fly (Edited by Dave Lordan).

"Turning to more recent developments in Irish literary culture, in fact, it is useful to think of poets such as Kevin Higgins, Dave Lordan, Elaine Feeney, and Sarah Clancy as the inheritors of this extremely diverse and largely non-academic Southern Irish poetic culture over the last few years—a cultural context that has received significantly less critical consideration to date than its Northern Irish counterpart.

Kevin Higgins’ interest in the performative and political aspects of poetic practice certainly owes something to the combined efforts of writers such as Galvin and Durcan before him, and the public impulse of his work is reinforced by the essays and shorter prose pieces collected in Mentioning the War: Essays and Reviews, 1999-2011. As the title suggests, Higgins’ work—like Bardwell’s, in this respect—seeks to discuss things that are often not given broad or open coverage, and in this collection he writes with equal critical insight about literary as well as political matters, regardless of their current cultural status, currency, or standing. An essay on George Orwell is followed by a piece on Elaine Feeney, which in turn gives way to reviews of books about the corrupt banker Seán Fitzpatrick and the Corrib gas pipeline controversy. Literary criticism and political/social commentary appear side by side in a book that demonstrates Higgins’ clear commitment to the value of the written word. Indeed, the contents of Mentioning the War are drawn from a diverse array of publications, including literary magazines and periodicals in Ireland, the UK, Canada, and Australia, but also from publications such as The Journal of the Galway Archaeological and Historical Society and the Albanian newspapers Ndryshe and Shekulli, demonstrating both the high regard with which Higgins’ work is held internationally and the transnational range and reach of his interests.

In an essay on the Russian poet Marina Tsvetaeva’s prose, Joseph Brodsky wrote:

What does a writer of prose learn from poetry? The dependence of a word’s specific gravity on context, focused thinking, omission of the self-evident, the dangers that lurk within an elevated state of mind. And what does the poet learn from prose? Not much: attention to detail, the use of common parlance and bureaucratese, and, in rare instances, compositional know-how (the best teacher of which is music). All three of these, however, can be gleaned from the experience of poetry itself (especially from Renaissance poetry), and theoretically—but only theoretically—a poet can get along without prose.

Kevin Higgins, like Leland Bardwell, is a poet first and foremost, but he did not need to write prose to learn the things flagged here by Brodsky. His essays, like his poems, attend with great care to relevant details, just as his political and cultural observations are often informed by actual experience and insight. As he puts it in an interview included in this collection but first published in 2009: ‘The writers I am always interested in are those who see everything in the world as their subject, and ruthlessly write the truth as they see it, come what may. Far better to do this than become a yes man or woman for this or that popular front.’ The breadth of topics discussed in Mentioning the War, coupled with Higgins’ intelligence and candour as a social, cultural, and literary critic, make this an indispensable volume, not just to readers interested in contemporary Irish poetry but to anyone interested in the current political, cultural and social climate. Including illuminating introductory pieces by Darrell Kavanagh and John Goodby, Mentioning the War reproduces some of the work published in Higgins’ earlier volume Poetry, Politics & Dorothy Gone Horribly Astray (Lapwing Press, 2006). Like Bardwell’s Different Kinds of Love, however, the pieces reprinted here retain all of the urgency of their earlier occasions. A poet may get along without prose, but no reader interested in the state of contemporary Irish poetry or culture can afford to ignore the interventions made by Bardwell and Higgins in these very different but immensely valuable prose collections."

The book was reviewed alongside the short story collection Different Kinds of Love (Dedalus Press) by Leland Bardwell.

Philip Coleman has previously written about my work in his extensive essay Against the Iron Railings of History: the poetry and some of the prose of Kevin Higgins which was published last August on Irish Left Review http://www.irishleftreview.org/2011/08/04/iron-railings-history-poetry-prose-kevin-higgins/
Posted by Jonathan Swift at 18:25 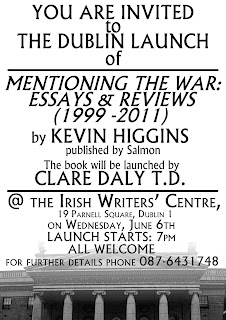 Lovely crowd from various walks of literary and political life at the Dublin launch of Mentioning the War at the Irish Writers' Centre last night. The launch speech was by Socialist Party and United Left Alliance T.D. Clare Daly and you can read it here  http://www.irishleftreview.org/2012/06/12/speech-clare-daly-td-dublin-launch-kevin-higgins-mentioning-war/ 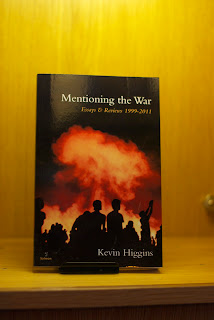 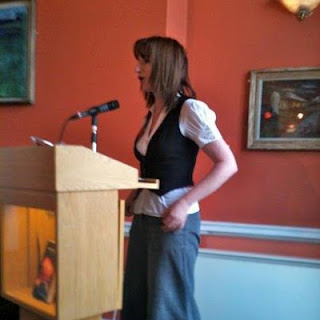 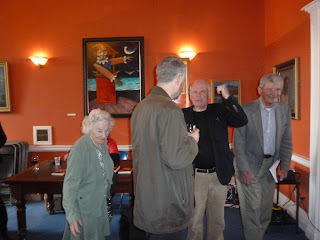 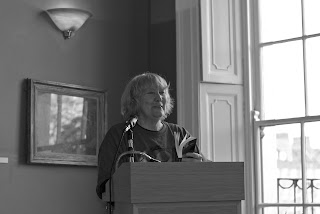 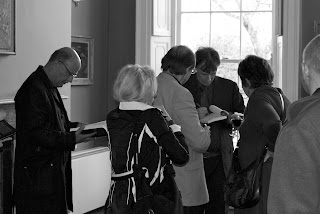 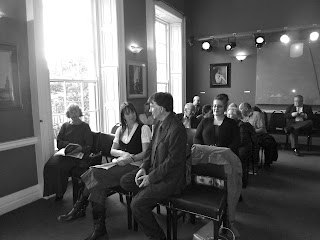 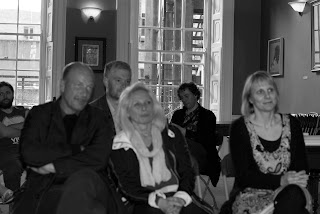 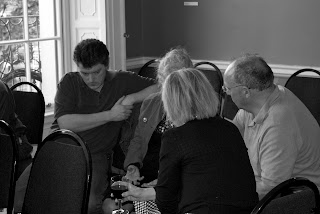 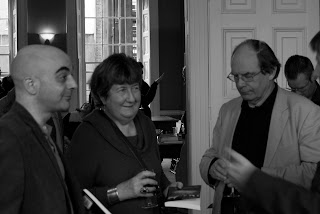 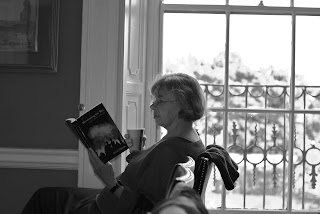 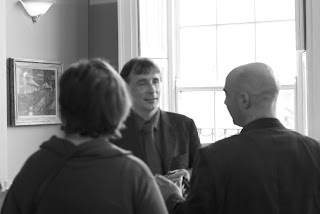 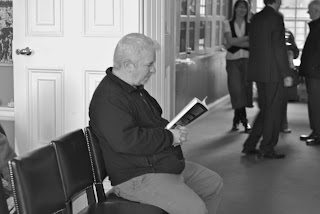 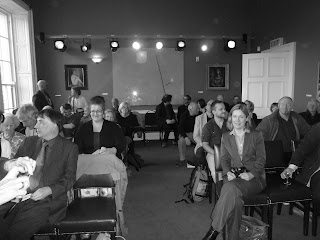 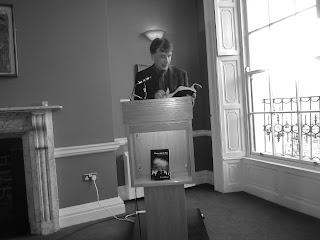 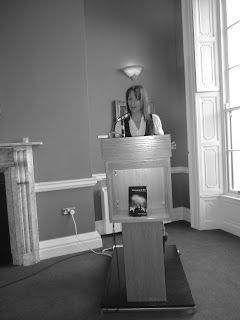 Generous review of 'Mentioning the War' in Books Ireland

"As a poet I have a dark secret. It’s a problem I have when it comes to the reading of poetry. It’s not that I don’t read poetry or can’t. I do and I can. But I have to admit that the reading of a lot of contemporary poetry is something close to a chore. If... I can just get to the end, I tell myself, I can read something else with a clear conscience. Too often, amongst the pages of poetry, I am overwhelmed by feelings of irrelevance. What the hell am I doing in the middle of this polite parlour game? Fortunately, though, there are poets that can be read with, even, as sense of anticipation and fortunately for me as a reviewer Kevin Higgins is one of these. In this book of essays we get to see just why that is so and get to see, beyond his essays, just why his poetry is so invigorating. Quite simply, the writings of Kevin Higgins manage to make poetry seem important.

This book is a collection of disparate essays and reviews and as with any collection there are a few fillers and some that are far better than others. Higgins is never going to let you get bored though and as a politically and poetically active artist has the great gift of stirring up your thoughts, with even the briefest of pieces leaving you with something to chew on. For reviewing the ludicrously underrated Ken Bruen he gained my admiration. For favourably reviewing Jonathan Fitzgibbon’s Cromwell’s Head, by far the silliest book I have ever reviewed, my bewilderment. For reviewing Paul Muldoon’s band, in particular his lyrics, my disagreement. Muldoon’s cleverness is neither daunting nor accessible, it’s just tedious. For his essay / critique of Red Lamp, my cringing laughter. Indeed his portrait of the poets at the start of the essay had me looking around the room in case he was suddenly pointing at me with a smirk.

Higgins is far too much an engaged and relevant writer though for this to be a book just for insiders, for poets to nod over together. The essay ‘Unmasking the Real Enemy’ is a brilliant piece of writing, whether you wish to call it political or social or whatever you’re having yourself, it is the writing, the writing that carries it. Which is where his strength lies, for however politically alert and concerned he is, however argumentative and contradictory, both as an essayist and as a poet, Higgins never loses sight of the fact that you better be able to say what you want to say, as well as being sure what it is you want to say. So whether you are agreeing or disagreeing with him you are never in doubt that you are involved with writing of the highest quality. For instance in his review of a Douglas Murray book extolling neo-conservatism I found myself profoundly disagreeing with him but unable to stop reading. Like quite a few of us on the disappointed, defeated left he can seem quite lost, quite often, and in his review of Murray’s book manifests that most profoundly. Appearing to follow the journalist Nick Cohen in having the old habit on the left of seeing the settling of scores with other factions on the left as a priority, his partial embracing of the neocons in this review is both a brave inclusion and an example of a mind in movement. Devil’s advocate is often the default position now for a left-wing writer and Higgins’s display of this works to his advantage, even when you sharply disagree with his position. But then what kind of work would be produced by an artist who doesn’t wish to wander into uncertainty, even of the most disconcerting kind? From poetry, through politics, to the personal, Kevin Higgins’s collection of essays will have you nodding in satisfied agreement, emphatically shaking your head in disagreement, laughing, cringing, and thinking. You’re not surely going to ask for much more than that, are you?"

Joe Horgan is a poet himself. You can find some of his work here http://www.munsterlit.ie/Writer%20pages/Horgan,%20Joseph.html
Posted by Jonathan Swift at 18:15