Myself and Susan are also reading in Amherst, Massachusetts

Poets Susan Millar DuMars & Kevin Higgins will read their poetry at Amherst Books,
8 Main Street,  Amherst, MA 01002, USA on Monday,  March 11th.
The reading starts at 7pm.
ALL WELCOME
For further details contact •   413.256.1547  •  800.503.5865  •  books@amherstbooks.com
•  http://www.amherstbooks.com/
The reading is organised by the University of Massachusetts-Amherst and generously supported by Culture Ireland. http://www.cultureireland.ie
Susan is looking forward very much to revisiting Amherst, where she attended Hampshire College in the 1980s. Amherst is also the birthplace of Emily Dickinson and, a little less famously, Cold War nuclear weapons specialist, Paul Nitze. Sounds like my kind of place. While we are in Massachusetts I'm hoping to fulfill a lifelong ambition by laying a wreath at the grave of Henry Cabot Lodge Jnr. 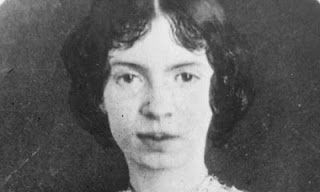 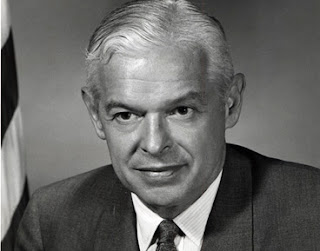 I will be reading with Susan at 'A Celebration of New Writing from Galway' @ the University of Missouri-St. Louis 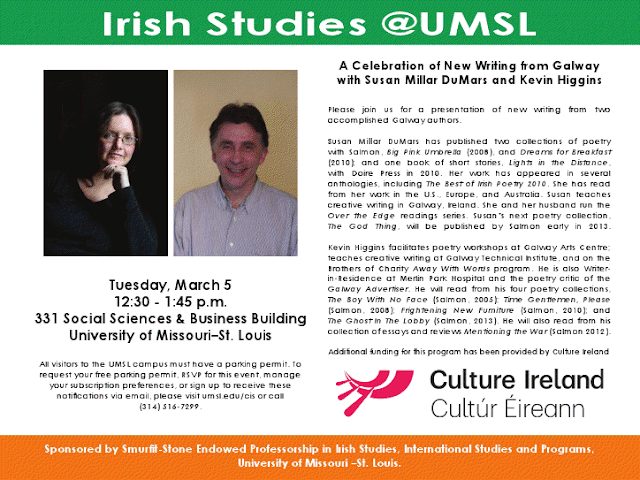 George W. Bush, the Iraq War and me

This weekend marks the tenth anniversary of the huge anti-Iraq War demonstrations. So, it seems fit to remember a poem of mine which I haven’t read for several years now: Talking With The Cat About World Domination The Day George W. Bush Almost Choked On A Pretzel. 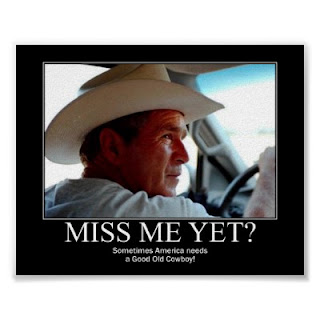 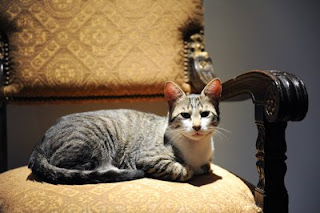 Talking With The Cat About World Domination
The Day George W. Bush Almost Choked On A Pretzel

Now that pretzel’s gone and done
something an expert like you never would
- loosening its hold a split-second too soon -
I think it’s time we revised our strategy.
Just sitting back waiting for the big collapse?
Face facts. It isn’t happening.
If there’s a job to be done, why not us?

This time tomorrow we’ll be in Washington
telling Bush to come out with his hands up.
Faced with me and you, Puss, I bet he’ll just crumble.
And we’ll whisk him off to Guantanamo Bay
where he’ll share a cage with the Emir of Kuwait.

I see from the frown wrinkling your brow,
you’re worried, perhaps, how
Mariah Carey fans everywhere might react.
Too late for all that. To put it in terms
I think you’ll understand: after the years wasted
here in this litter-tray, it’s time to deliver
for me and you, Puss. Our battle-cry?
Something snappy? Like?
Yes, I have it! Repeat after me:
Don’t make me angry, Mr Magee.
You wouldn’t like me when I’m angry.
﻿In the Spring of 2003 it featured in the anthologies Irish Writers Against War (The O’Brien Press) edited by Conor Kostick and Katherine Moore (with a foreword by Richard Boyd Barrett) and 100 Poets Against The War (Salt Publishing) edited by Todd Swift.

To buy a copy of Irish Writers Against War
http://bookshop.blackwell.co.uk/jsp/id/Irish_Writers_Against_War/9780862788254

The poem also features in my debut collection The Boy With No Face (Salmon Poetry, 2005)
http://www.salmonpoetry.com/details.php?ID=108&a=108

A lot of water under the bridge in the decade since that poem first appeared (and a lot of the other stuff too) but  in the words of Kurt Vonnegut: “so it goes.”

The Next Big Thing 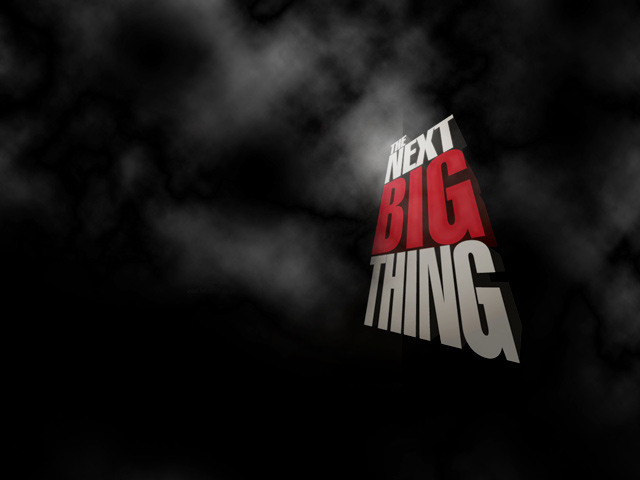 1)What is the working title of your next book?
The Ghost In The Lobby

2) Where did the idea come from for the book?
It’s a line from one of the poems in the book, which seemed to in a sense fit some of the themes in the collection. I used to think that L.P. Hartley had it right when he wrote: “The past is foreign country: they do things differently there.” These days I tend to think William Faulkner was closer to the mark when he wrote: “The past isn’t dead. It isn’t even the past.” The world we live in is in so many ways defined by the ghosts that define us. We all have them.

3) What genre does your book fall under?
Poetry

4) What actors would you choose to play the part of your characters in a movie rendition?
It’s unlikely to happen, as it’s a poetry collection, but if I was pushed I’d have to say Richard Burton, even though he’s been dead for 29 years, which makes it all the more unlikely. Billie Whitelaw should have a part also and, finally, Roger the alien from American Dad. I know he’s not a real person. But I don’t like to be restricted by such realities. I think Richard and Billie and Roger could really do justice to these poems.

5) What is the one-sentence synopsis of your book?
I don’t have one yet. But something like ‘Lung cancer, economic meltdown & socialist revolution: the funny side’

6) Will your book be self-published or represented by an agency?
It is published by Salmon Poetry

7) How long did it take you to write the first draft of the manuscript?
About two years
.
8) What other books would you compare this story to within your genre?
It’s the place 1984 meets Journey To The End of The Night

9) Who or what inspired you to write this book?
As one time British Prime Minister, Harold McMillan, once said: “Events, dear boy, events.”

10) What else about the book might pique the reader's interest?
One of the poems in it, Austerity Mantra, has already been criticised by a member of the European Parliament after it was translated into Greek and published in an online journal there. Paul Murphy Socialist Party MEP for Dublin, in a particularly devastating flash of Marxist literary criticism, had the following to say about the poem: “Haven’t the Greeks suffered enough without having this inflicted upon them.” I particularly like his rather nifty use of the word: ‘upon’. I consider it a great compliment and am thinking of asking him to launch the book when the time comes.

Deirdre Cartmill has asked me to take part in this blog hop project, so any one offended by anything I say here, or who wishes to take legal proceedings should contact her.

Deirdre’s bio is below.

Below that I answer some questions about my next book. Later today I will be posting the names and details of some other writers who I’ll be asking to take part in the next stage of this project.

Deirdre Cartmill is a poet, writer and creative writing tutor (http://www.poetryireland.ie/education/wis-directory.php?id=324). Her debut poetry collection Midnight Solo (http://www.amazon.co.uk/Midnight-Solo-Deirdre-Cartmill/dp/190465214X) is published by Lagan Press and her second collection The Return of the Buffalo will be published in 2013. She has written for film, television and radio as Deirdre Alexander and her short film Two Little Boys (http://www.northernirelandscreen.co.uk/catalogue/235/107/two-little-boys-2012.aspx) was produced in 2012. She won the Claddagh Films Script Award and the BBC Writersroom Undercover competition and has been shortlisted for several awards including the Hennessy Literary Award, the Scottish International Poetry Competition and the Red Planet Prize. http://www.deirdrecartmill.com
Posted by Jonathan Swift at 00:38

Email ThisBlogThis!Share to TwitterShare to FacebookShare to Pinterest
Labels: Deirdre Cartmill, The Next Big Thing

The Destructive Critic And Idiot Who Thinks You're A Genius 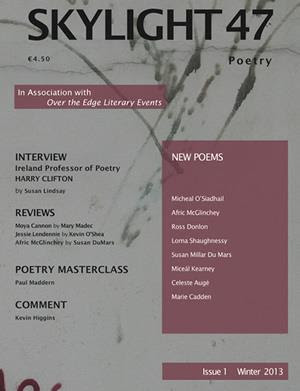 I have a short essay titled The Destructive Critic And The Idiot Who Thinks You're A Genius in the debut issue of the excellent new Galway-based poetry paper, Skylight 47, copies of which can be purchased via Paypal here
http://www.overtheedgeliteraryevents.blogspot.ie/2012/11/skylight-47-possibly-irelands-most.html
Posted by Jonathan Swift at 13:55