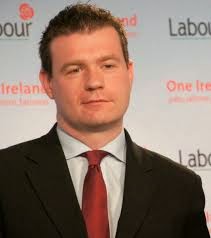 My poem Kelly, which is absolutely not about Minister for the Environment, Alan Kelly, is published today on The Bogman's Canon, on Rabble.ie , on Clare Daly TD's Facebook page, and on Irish Left Review. 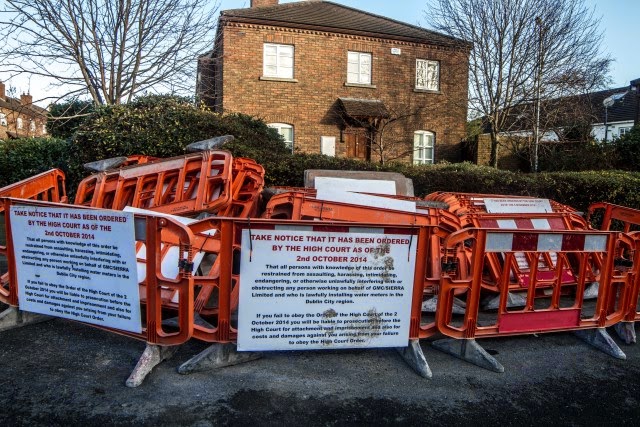 My poem 'Bacon, Chips, and Beans', the form of which is inspired by Colette Bryce's 'When I Land In Northern Ireland', is just published on the often controversial UK based political website Harry's Place.

The poem is specially dedicated to Lewis Peacock, the Trade Union & Socialist Coalition candidate for Edmonton in the upcoming UK General Election, which takes place on Thursday, May 7th.  I recruited Lewis to politics back in the Summer of 1990, all of twenty five years ago, and it's been great to see him not grow up politically.
There have already been serious consequences on foot of the publication of this poem; Steve Hedley, assistant General Secretary of the RMT union, has unfriended me on Farcebook having informed me that Harry's Place is "a Zionist site" and, that being the case, he does not wish to be associated with me if I am in any way associated with it. I would ask that myself and the cat be allowed the privacy to grieve Steve Hedley's passing from my Farcebook friend's list. It is a difficult time for all concerned, obviously.
On a more positive note, my Twitter campaign to get the Trade Union & Socialist Coalition to adopt Fleetwood Mac's Tusk as its General Election theme song is going well, with many comrades expressing support.
Posted by Jonathan Swift at 12:03

Further from my much better half-Susan Millar DuMars re: the article she published on her blog yesterday

Further from my much better half Susan Millar DuMars re: the article she published on her blog yesterday: "I hear there has been a lot of discussion on Twitter about my last blog article. I'm not on Twitter, so if anyone wants to contact me directly you will need to use FB, email (s_dumars@hotmail.com) or comment on the article itself. My knowledge of Pat Cotter's editorial practice re: Poetry Magazine was not supposition; it came from a FB post by Pat Cotter himself. My criticism of him is part of a larger article making a larger point about openness in the arts. I believe that, as a successful arts organizer for 12 years and counting, I am an appropriate person to bring up the topic. A few have tried to dismiss my comments as "sour grapes" by a frustrated poet. Actually, I understood early on that the magazine issue was for poets born in 1970 or after so I am not eligible. It is a shame that whenever one of us tries to initiate thoughtful debate within the literary community, some rush in to claim that the issue is personal." 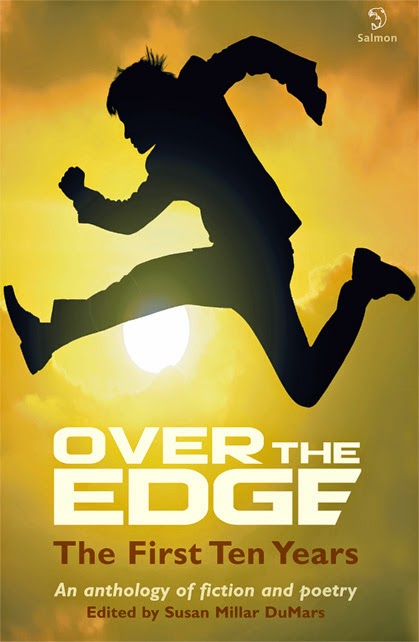 Susan edited Over The Edge: The First Ten Years: An Anthology of Fiction & Poetry (Salmon 2013)

“Over the Edge provides a unique support and showcase opportunity for emerging writers. Often, the talent is there before the confidence and Over the Edge nurtures that voice and gives it a space to be heard.  Whether it is on a Cúirt stage or in the back of a library, this moment is truly special, and so many wonderful writers have emerged from these beginnings.”
Dani Gill, Director of Cuírt International Festival of Literature


“Over the past 10 years, Susan Millar DuMars and Kevin Higgins have established the Over the Edge readings not only as the main regular literary event in Galway but also as one of the leading venues in Ireland to hear new writers read their work. There were readings in Galway before Over the Edge of course (and plenty of them) but perhaps what made Over the Edge important is that it became a fixture; writers and audience alike have come to depend on something new being served up each month and, unlike many readings, audiences are consistently good. These readings have brought writers from all over Ireland to Galway every month, not just during festival season. It has become bigger than Galway, the West and Ireland though: they also present writers from around the globe, acting as matchmakers for audiences and writers to connect for the first time in some Galway establishment.


While its reach is broad, Over the Edge is still a resolutely Galway event – each reading will include a local writer who is making a name for themselves. The boon provided to emerging writers by this opportunity should not be underestimated. In the 10 years of Over the Edge, Kevin and Susan have become sort of literary godparents to a host of Galway writers. That many of the names in this anthology are instantly recognisable to anyone who has even a passing interest in contemporary Irish literature is testament to that.


This anthology represents another milestone for Over the Edge and it probably won’t be the last.  Along with everything else, they are to be applauded for their endeavour, perseverance and patience. The habitual hospitality that has greeted us all over the years, whether on cold Atlantic nights or sunny afternoons, battling the odours of obscure cheese in Sheridan’s or in the more serene environment of the City Museum, now awaits the next 10 years’ worth of poets, novelists and performers who venture west and Over the Edge.”
Alan Jude Moore, Poet and editor of Burning Bush 2
Posted by Jonathan Swift at 03:55

Poem for this Saturday

Today is St. Patrick's Day and tomorrow, as part of the 'I Will Arise And Go Now Festival' in Gort, I will be MCing the special Yeats2015 Over The Edge: Open Reading at Gort Library.

To mark the occasion I am publishing my re-write, penned back in the year 2000, of Yeats' poem 'When You Are Old'.

Yeats' original can be read here; my re-write is here.
Posted by Jonathan Swift at 11:06

Email ThisBlogThis!Share to TwitterShare to FacebookShare to Pinterest
Labels: Poethead, When You Are Old, Yeats2015

I am interviewed by Meabh Ann McCrossan on HeadStuff

Last month Meabh Ann McCrossan interviewed me for the HeadStuff webmagazine. You can read the interview here.

“Meabh Ann McCrossan is an eighteen-year-old poet from Galway. She writes in a way which has been described in the past as "self-deprecating". Once, she wrote a poem about her distaste for Mathematics for her Mathematics teacher, who subsequently asked her to sing at his wedding. Therefore, she is a walking example of where poetry can get a person. Currently studying for her leaving certificate exams, Meabh Ann is maintaining the poetic lifestyle within the walls of the school building by all means possible — wearing literal flowers in her hair and listening to The Smiths at least once a day. Meabh Ann writes poetry and short fiction and complaint letters to chocolate companies.”

750 (approximately) civilians were killed in the 25 years of the Northern Irish troubles; that's excluding members of the British Army, RUC, Republican, and Loyalist paramilitaries. 500 people have committed suicide in the 7 years since 2008 because of issues linked to economic crash. 500. For details see here.

There'll be no screaming headline from next week's Sunday Indo about that statistic, no shrill whine on the inside pages from Irish O'Hanlawn. Of that we can rest assured.

These 500 suicides were brought to you by sensible policies for a better Ireland. Policies which have been road tested and fully approved by Stephen Collins of the Irish Times.

But in more positive news: the tiny erection which Eoghan Harris has been experiencing since he heard about Lucy Kryton setting up her new party shows no signs of subsiding. 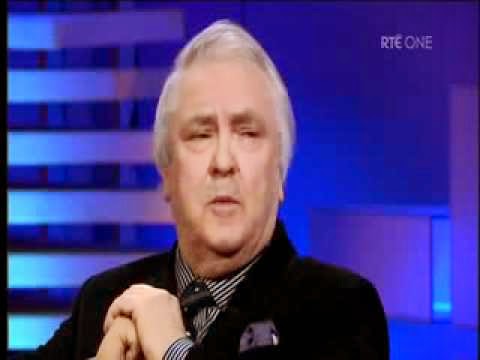 Email ThisBlogThis!Share to TwitterShare to FacebookShare to Pinterest
Labels: Eoghan Harris, The Ballad of Lucy Kryton

I came home after MCing our March Over The Edge Writers' Gathering last night to find the above Tweet on that endlessly trickling torrent of wisdom that is Twitter.

It would appear that someone thinks I should be the next President of Ireland. They might be joking. But I think this is a great idea, and so propose to take it at face value.

At any poetry readings I do between now and the next Irish Presidential Election in November 2018, I will insist on being introduced as "Kevin Higgins, next President of Ireland".

My presidency would be a presidency of reform and renewal; mostly for me, I badly need it.

I have already decided on one change to existing Presidential protocol. As of my inaugaration on that historic day in November 2018, the country will have a new Presidential Anthem, which will be the words of my poem 'Autobiography' set to music by Chris DeBurgh and sung (at rugby matches, camogie finals and the like) by that rising Irish radio star, Terence Flanagan TD.

I've looked into the rules, in terms of how one gets to be President, and, according to Wikipedia, they are as follows:

"To qualify, candidates must be a citizen of Ireland, be at least 35 years of age, and be nominated by: at least twenty of the 226 serving members of the Houses of the Oireachtas [TDs or Shenators], or at least 4 of the 34 county or city councils or him- or herself, in the case of an incumbent or former president who has served one term."

I know this will come as a surprise to many of you, but I  can confirm that, despite my youthful looks, I am indeed at least 35 years of age. And I am certainly a citizen of Ireland.

I am, though, despite rumours to the contrary, not Michael D. Higgins, so I cannot  nominate myself.

So I need either twenty TDs or Shenators, or 4 county or city councils, to nominate me to be the next President of Ireland.

UPDATE: This campaign is growing legs. See article on Politics.ie.