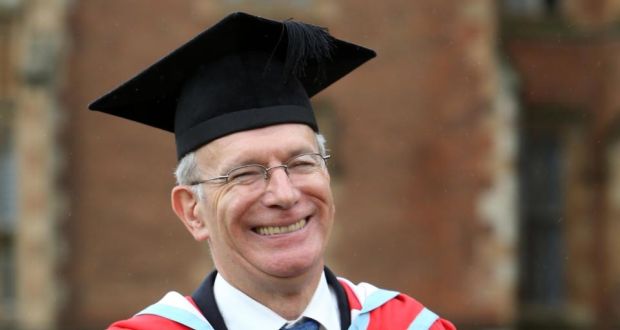 This is Fintan O'Toole, one of the great brains of liberal Ireland. His mind is said to contain a detailed blueprint of the country Ireland could be if only we stopped voting Fianna Fáil, which of course we already have. 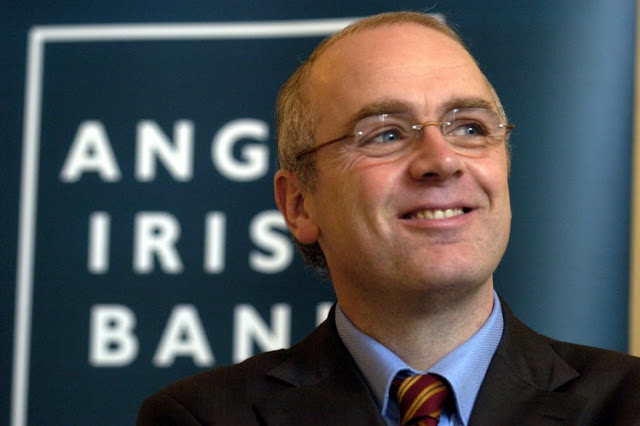 This is David Drumm, former CEO of Anglo Irish Bank, currently in jail in Massachussets pending an extradition hearing. The authorities here in Ireland would like to (ahem) talk to David about some stuff.

Last week, in the hallowed and posh pages of The Irish Times, Fintan O'Toole launched a campaign to get David Drumm released from jail.

I agree with Fintan. In fact I'd go further. I think David Drumm is the Nelson Mandela of our time. He should be released immediately and allowed roam freely through whatever countryside he wishes.

I have composed a small poem The Lonesome Incarceration of David Drumm to support Fintan O'Toole's campaign. This is one of the great injustices of our time. It's time we made a stand.

The Day Bowie Died - a poem in response

I have a very new poem 'The Day Bowie Died' just published on The Bogman's Cannon. It is 'after' Frank O'Hara's poem 'The Day Lady Died', which O'Hara wrote about the day Billie Holiday died in 1959.

Lulu, Gary Barlow, Mick Hucknall, Cliff Richard, Kanye West, and Noel Gallagher - cultural and philosophical heroes of mine every one of them - all get a mention.

Our cat Ziggy makes a guest appearance at the end. 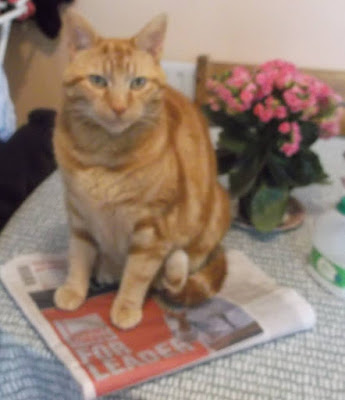 'Poetically Charged News Cycles' - my essay in The Raintown Review 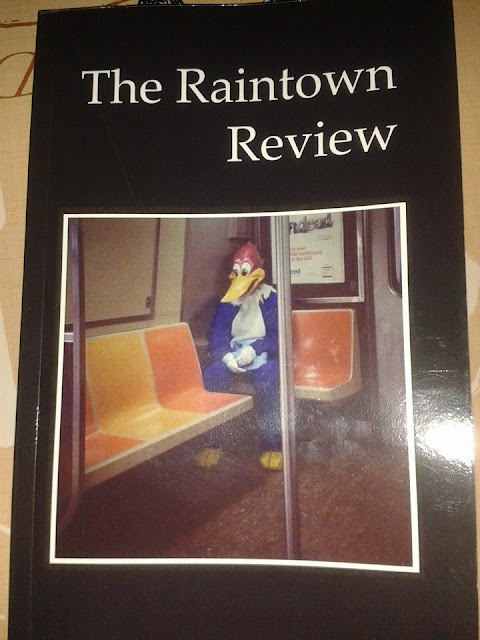 I have an essay titled 'Poetically Charged News Cycles' in the current issue of the American poetry journal The Raintown Review. 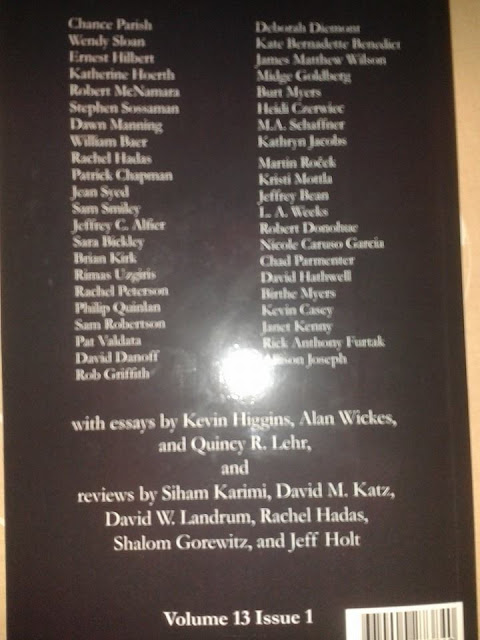 Here is an extract: “It’s probably best that I nail my underpants to the mast at the get-go as an active participant in the events I describe rather than pretend to be any sort of objective observer. In any case, in these fraught times here in Ireland the objective observers are mostly languishing in the particularly hot corner of Hell to which Dante consigned those who in a time of crisis, such as now, have nothing to declare but their neutrality. Since the late summer of 2013 the apparently stable edifice that was the Irish poetry world has been struck by a number of earthquakes–and several significant aftershocks–which have left the building looking shaky.
First, the death of Seamus Heaney who, whatever your poetic aesthetic or politics, was undeniably a world-class poet who dominated Irish poetry in a way that is rare. Heaney wasn’t just our best poet; he was our second, third, fourth, and fifth best poets as well; and was to a large extent the currency on which Irish Poetry Inc. traded with the rest of the poetry world. His passing was like the retirement of a great player from the team built around him; a few games into the next season the fans, media, and even the chairman of the board suddenly realize how threadbare the rest of the existing lot look without him, and the dread sets in.

The second big happening was the going up in flames last autumn of the fantasy, beloved of many Irish media or arts liberals –our equivalent of those Americans who orgasm at the very idea of a Hillary Clinton presidency–that unlike the French and the Greeks and whoever else, the Irish never protest…" Those interested in reading more can buy copy of the magazine here.
Posted by Jonathan Swift at 18:01 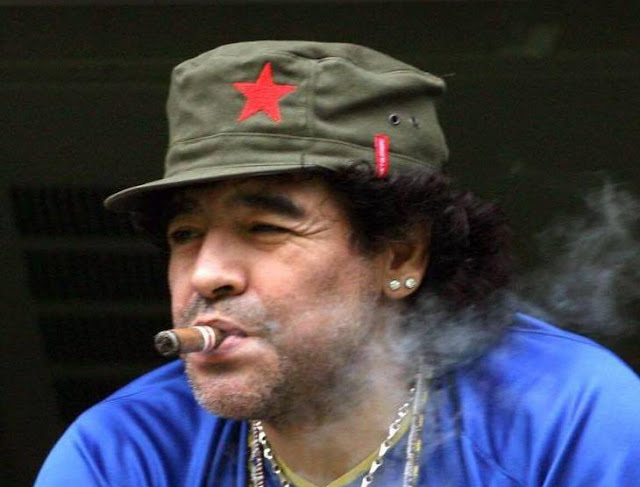 Loathe it, as a few careerist literary nerds here and there certainly do, or love it, as I - and many others - do, there isn't much denying that the advent of the alternative literary site The Bogman's Cannon has been the event of the year in Irish literary circles.

The Bogman is unusual, not to mention revolutionary, in the way that it combines literarature and political criticism in an always lively manner. Many literary magazines like to claim that they are not afraid to offend the Establishment. Mostly, when such claims are made, it's either a lie, or at best an exaggeration. For your average state funded lit-mag there is always a line one will not be allowed to cross. For example, no state funded Irish literary magazine will ever run an article detailing what an atrocious Minister for The Arts Heather Humphreys has been, though everyone knows it's the truth. 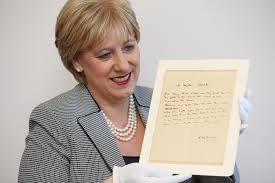 Of course Heather will be gone soon, and there'll be another Minister to lick up to, for those with willing tongues. What separates The Bogman's Cannon from such slurpers is that not only is it prepared to offend establishments of all varieties, it actively sets out to offend those who need offending. It has also been a real stimulus for much needed debate. And it is not at all totalitarian; you don't have to agree with everything that's said in every article, poem, story, or video.

The aforementioned careerist nerdlets hate The Bogman, and their hatred is similar to that felt by the Blairites in the British Labour Party for Jeremy Corbyn and his supporters. They expected to easily inherit the Earth, but it's not turned out as straightforwardly as they imagined; history and politics appear to taking one of those violent turns. Like 1848, 1871, 1917, 1936, or 1968. And all such inheritances are open to challenge. Irish poetry now certainly has a left wing, and it of course has a right wing, though as in the British Labour Party, that right wing pretends to be something other than what it actually is. Such 'moderation' has always been with us. Though, thanks in part to the stimulus provided by The Bogman's Cannon, the 'moderate' critics of too much political poetry, and too much irreverence, are increasingly not the prevailing trend in Irish poetry.

2015 was a huge year. If someone had told me last January 1st that I would again be a member of the British Labour Party, and a supporter of the leader, I would have suggested that they see a psychiatrist urgently. Indeed, I would probably have phoned the psychiatrist of their behalf. Yet on Saturday, September 12th Jeremy Corbyn was elected Leader of the British Labour Party by an overwhelming majority, and I voted from him, having re-joined the party as an overseas member. Twenty four years previously, to the day, on September 12th 1991, I was expelled from the British Labour Party because of my (then) membership of Militant and involvement in the anti-poll tax campaign. As part of the campaign to support to Jeremy Corbyn's leadership bid I put together, with the support of Portsmouth Labour Party member Darrell Kavanagh,  21 Poems: 21 Reasons For Choosing Jeremy Corbyn, an initiative The Bogman enthusiastically backed.

The revolution may not exactly be at hand, but things are not as they have been for the past quarter of a century or more. The 'moderates', or to call them by their proper name, the Right are now on the defensive both politically and culturally.

My main contribution to the cultural aspect of this revolt has been as The Bogman's Cannon's Satirist-in-Residence. I published about twenty poems on the site during 2015.

I am really looking forward to 2016 during which, as well as continuing to satirise those that need it for The Bogman, I will also be going to Dublin to do some canvassing for my friend Clare Daly in the Dublin Fingal constituency, as well as doing my bit to block Irish Water contractors entering the Corrib Park estate, one of the largest in Galway City, the only entrance to which is, as luck would have it, right outside our front door. Last August, along with four local women, I stood on the road in front of one of their vans at seven o'clock in the morning and, together, we held the line until more residents joined us and the contractors gave up. 2016 will no doubt see more such excitement.

I already have a few new poems ready to go for The Bogman's Cannon, with which I am proud to be associated. Dave Lordan, the main driving force behind the site, deserves huge credit for what he's brought about. May it continue to inspire us, and to upset those who deserve to be upset.
Posted by Jonathan Swift at 19:05