Poem In The Manner of The Late Kevin Higgins: What is most striking is his immense self-regard

My 'Poem In The Manner of The Late Kevin Higgins' is just published in the special Irish issue of the Portland, Oregon based online literary magazine Penduline, which is edited by Dave Lordan with the following epigram from a 'Member of the Socialist Party whose name no one remembers':

“What is most striking is his [Kevin Higgins's] immense self-regard.”

You can read the poem in full here
http://www.pendulinepress.com/author-article-archives/hopperville-poem-in-the-manner-of-the-late-kevin-higgins/

The issue also includes ‘Standing on the Couch: the Over the Edge Readings Series Turns Ten' an essay by Susan Millar DuMars plus fine new writing by a range of rising Irish writers.
Posted by Jonathan Swift at 16:02

On its website The Conference of Religious of Ireland describes itself as “an Organisation of friars, sisters and brothers from across Ireland, with history, structures, activities, publications and commissions on various topics.” The Conference of Religious of Ireland (C.O.R.I) is best known for expressing concern about poverty through the earthly vessel that is Father Sean Healy. You can read more about C.O.R.I. on their website http://www.cori.ie/ . They’re a right rowdy crowd.

Unfortunately, this weekend C.O.R.I. have gone beyond their usual ineffectual expressions of anguish about the growing gap between rich and poor and issued a statement in which they accuse the government of Enda Kenny & Eamon Gilmore of behaving like a "totalitarian regime" by not allowing backbench Fine Gael and Labour T.Ds a free vote on the government’s upcoming abhortion legislation aka the Protection of Life During Pregnancy Bill. For more such obscurantist ramblings you can read the full C.O.R.I statement here  http://www.rte.ie/news/2013/0607/455123-abortion-legislation/

There have been a number of totalitarian regimes throughout history. Hitler, Stalin and Pol Pot come to mind. But I’m bored talking about that crowd.

Another totalitarian regime was the one which ruled much of Europe during the Dark and Middle ages: the Catholic Church.

Here’s an example of the type of thing the organisation, of which C.O.R.I. is part, got up to then:

“While the accused heretics were on strappado or the rack, inquisitors often applied other torture devices to their bodies. These included­ heated metal pincers, thumbscrews, boots, or other devices designed to burn, pinch or otherwise mutilate their hands, feet or bodily orifices. Although mutilation was technically forbidden, in 1256, Pope Alexander IV decreed that inquisitors could clear each other from any wrongdoing that they might have done during torture sessions.”

Good old Pope Alexander IV. As Popes go, he’s one of my favourites. The above mentioned application of pincers and thumbscrews to the soft bits took place in Spain. I’m told the Museum of the Inquisition in Seville is well worth a visit. This is the sort of thing totalitarian regimes get up to. Whatever one might say about the current coalition, they are no such regime. Fine Gael and Labour T.D.s, such as Blessed Colm Keaveney and Michelle Mulherin, who vote against the government’s abhortion legislation, will not have hot metal pincers inserted up their anuses. They will lose the government whip for a while and be expelled from the parliamentary party. They will though remain T.Ds until at least the next General Election. The assorted friars, sisters and brothers of the Conference of Religious of Ireland should rest easy in their beds; the anuses of Colm Keaveney and Michelle Mulherin (pictured below with some of her enthusiastic supporters) are safe in Enda’s and Eamon’s hands. Pope Alexander IV would not approve: his heretics did not live to be thrown about by their supporters come the result of the final count in the subsequent general election. 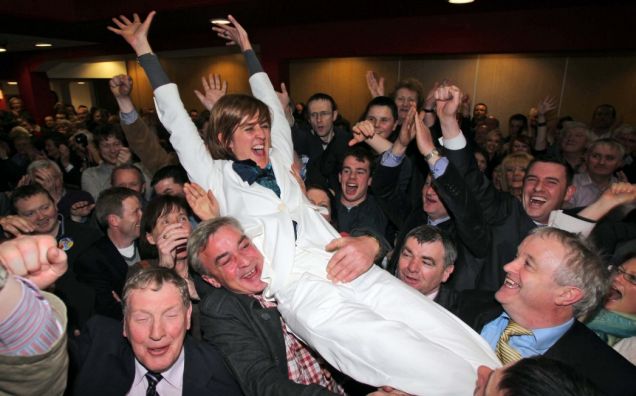 Just found out I'm the featured poet today on the blog of Vallum contemporary poetry magazine, which is based in Leonard Cohen's home town of Montreal.

The title of the poem is 'Betrayals' and it originally appeared in the print version of Vallum back in 2007.

A lot has changed since. But, to quote Louis MacNiece, once in another world,  I wrote this:  http://vallummag.blogspot.ca/2013/06/featured-poet-kevin-higgins.html?spref=fb
Posted by Jonathan Swift at 16:26