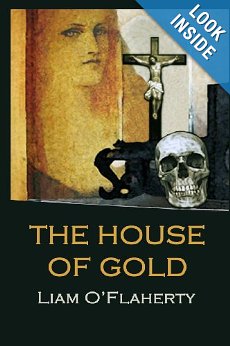 My extended review of Liam O’Flaherty’s just re-published banned novel The House of Gold is in issue 53 of Red Banner magazine. In the review I name lots of names.

Here's a quote from it:

“An interesting footnote to the suppression of this and the many other books banned in those decades is that the justice minister of the day—my not even slightly liberal near-namesake Kevin O’Higgins—was initially opposed to the banning of books. But concerned citizens campaigned to put that right. In 1926 the snappily named Committee on Evil Literature was set up and reported on the issue for the Department of Justice. After, that is, spending ten months getting all hot and sweaty reading every ‘filthy book’ they could lay their moist palms upon. Today such a committee would probably include such luminaries as William Binchy, Labhrás Ó  Murchú, Breda O’Brien, the ever greasy Senator Rónán Mullen, and the tragic monument to bullshit that is John Waters. The result was the Censorship of Publications Board, set up in the generally happy-clappy year of 1929.”
Posted by Jonathan Swift at 11:52

"Des Kavanagh tells me I should take one of your poetry workshops." Seamus Heaney 1939-2013

I met Seamus Heaney twice. The first time was after my Strong Award shortlist reading at the Poetry Now Festival in Dun Laoghaire in 2006. There was a reception afterwards and he came up to me and said: "Des Kavanagh tells me I should take one of your poetry workshops." Des went to school with Seamus Heaney and has taken many workshops at Galway Arts Centre with me. For once, I was a bit speechless.

The second time I met him was when in 2009 he came to the reading at Clifden Arts Week by the same workshop group Des had told him about. He was in Clifden to read at the festival himself. Afterwards, the whole group had an extended lunch in Des's apartment in Clifden with Seamus. He spent most of the time talking to the workshop participants, who are the same group who have since launched the Skylight 47 poetry paper. It was great to see.
Posted by Jonathan Swift at 07:51

My poem 'The Eternal Peace Activist' is published on the often controversial U.K. based current affairs blog Harry's Place. The poem is, in a way, my riposte to Donovan's Universal Soldier. 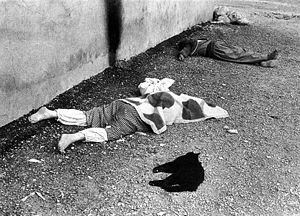 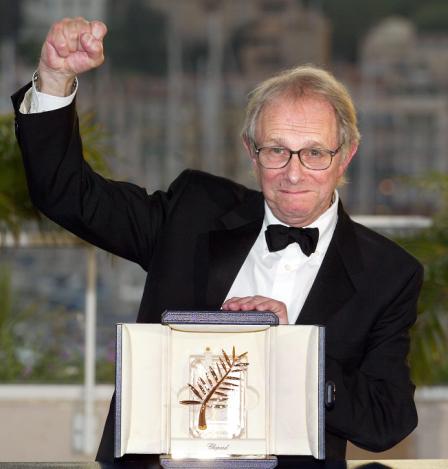 Ken Loach is that rare, if not unique, thing: a famous film director who is also a lifelong socialist. And not just a 'socialist' of the I-vote-Labour-every-four-years-because-the-Tories-are-terrible sense. Ken is actually in favour of doing something about capitalism. Possibly even abolishing it. Many artists pretend at political engagement. But whereas Bono just wants to give Beelzebub a hug. 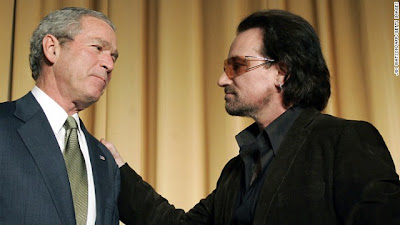 Ken Loach has always been, and remains, on the side of the angels. 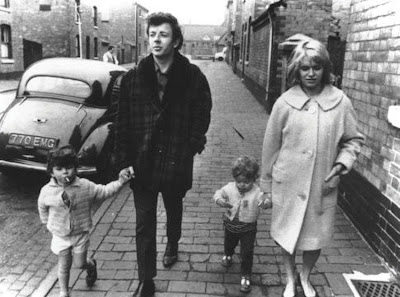 For five decades Loach's films have brought British working class lives to the big screen in a manner that is admirably unsentimental.

Of late, Ken has been involved in the Left Unity project in the U.K. On foot of his recent film The Spirit of '45 Loach put out a call for left wing and trade union activists in the U.K. to coalesce together to form a political party which would aim to challenge Ed Milipede's Labour Party from a truly socialist, left wing standpoint.

There have, during the past few years, been a number of such projects which have, ultimately, been either stillborn or strangled shortly after birth.

In 2006 the Scottish Socialist Party (SSP) was split assunder by the Tommy Sheridan swingers' club fiasco. Until 2006, though I hadn't been politically active since 1994, I thought that the SSP seemed like a most excellent idea. What was not to like about it? Almost all of Scotland's socialists in the one united party which, by the time the 2003 Scottish Parliament elections came around, had grown to become a serious electoral force; the SSP won six seats in that election.When the Tommy Sheridan scandal broke in August 2006 I went through a phase of thinking that the organised far left should collectively be handed the proverbial bottle of whiskey and then the proverbial pistol and told to go out to the garden shed and do the decent thing. At the time capitalism was going great guns, and this too, I admit, added to my vehemence.

As did the fact that, locally, on issues relating to arts funding and the like, one again and again heard more sense from your average Fianna Fail, Fine Gael or Progressive Democrat member of Galway City Council than one could ever dream of hearing from the further left, among whom the main divide on such issues appeared at the time to be between the opportunists and the fools.

Then during the course of 2008 capitalism went and almost collapsed, which was most inconvenient, because it was certain to breath life into left wing political movements which, by then, I regarded as being, well, the Devil.

When the United Left Alliance (ULA) was formed here in Ireland in late 2010, I was, to put it mildy, a little less keen about it than I had been about the Scottish Socialist Party. Of course the ULA was never a proper political party, which normal human beings could join and have a say in, but was an alliance of convenience between, in the main, Socialist Party mini-dictator Kevin McLoughlin and Socialist Workers Party godhead Kieran Allen. I published this poem, 'Against Togetherness', in response to the formation of the ULA. An extract from it was included in the Upstart.ie project which saw poetry-posters displayed all around Dublin during the 2011 General Election campaign. 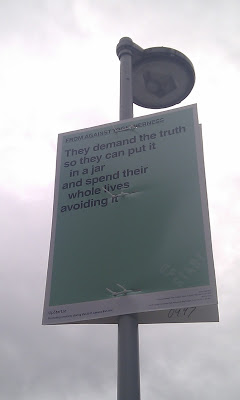 The rest is history and not in the way that Commissars Allen and McLoughlin would have planned it. The political divorce I predicted for them on the occasion of their marriage indeed came to pass. But the manner in which Clare Daly has courageously broken free from the batty, dictatorial sect the Socialist Party now undeniably is, has re-awakened in me hopes I'd thought dead.

It was with these re-awakened hopes that I began listening to Nick Wrack's recent speech about Left Unity. It was an excellent speech, inspiring in many ways. It was made at an event organised by the Communist Party of Great Britain (CPGB) which is a little worrying, perhaps, given that organisation's previous support for some pretty horrible dictatorships: Brezhnev, Honecker, Jaruzelski and all that crew. Despite this reservation, Nick's speech added to rather than subracted from the aforementioned  hopes.

(CORRECTION 26/8/13: I am told the Communist Party of Great Britain is not the same organisation as the one of the same name which existed before the fall of the Berlin Wall and had a marked tendency to support dictators).

I took a look at the Left Unity website to investigate a little further. I looked up the articles labelled 'Culture' - it being my special area of interest - and it was there tragedy struck, when I found possibly, no definitely, the worst poem I have ever read. And that is saying something.

It's titled 'Poem for the People' and here are the first two stanzas:

"How comes there’s no money for the poor,
When the millionaires sending his money offshore?
Bedroom tax is completely unfair,
Next you’ll be charging us £50 a stair.

The only parasites in this ‘big’ society
Are the hedgefund manager and the corrupt MP,
Not the normal people trying to survive,
When the casino capitalists gambled our lives."

The poem goes on in this clunking, clichéd socialist realist vein for another 28 stanzas: a total of 129 lines. Here are the final two stanzas:

"So don’t let them divide and conquer,
Anything less then socialism now is bonkers,
Let’s put get it back on the political agenda
when the welfare state is broken it’s the only way to mend her

Make choices based on need not profit
So come on, use your feet, use your voices,
Fight to give ordinary people more choices,
Can you feel it here? This sense of communion?
People, different parties and trade unions.
That’s how we beat them, by acting together, as one.
Stand together. The time has come."

It is rare to come across a poem that has not one redeeming feature, but this is such an occasion. I feel a little cruel writing about it here and mean the author no harm. But it was published - all 30 stanzas, 129 lines - on the Culture section of a new political movement being currently championed by a famous left wing film director. This makes the poem's relentless rolling clichés - "casino capitalists", "divide and conquer", "need not profit" - and its profound banality - "normal people trying to survive", "Bedroom tax is completely unfair", "That’s how we beat them, by acting together, as one" - something approaching a crime against culture and, perhaps, against socialism also.

No one believes politicians when they speak in clichés. Clichés are phrases borrowed from the back of someone else's closet. Similarly, this type of poem convinces no one because it does not seem to really believe in its own cause. If it did, it would take the trouble to find a few new metaphors, a new simile here or there to startle the reader awake.

When I'd finished reading this poem I wanted to die. That a poem such as this could appear in such a place as the Left Unity national website makes me think the world doomed. Its rattling rhyming couplets - the writer is clearly convinced there's nothing more to poetry than piling bad rhyme upon bad rhyme - bring  to mind the dullard heroic realist verse favoured and promoted by the late Josef Stalin. This is the sort of poetry consciously promoted by those who carried out the purges in 1936 and 1938 and had Trotsky murdered in 1940. It also the sort of poetry which SWP opportunist morons in Galway would pretend to be better than the work of a petite-bourgeois dog such as yours truly, if they thought they might recruit half a mouldy duffel coat by so pretending.

On Facebook this poem has already provoked much reaction. One person said that it made them want to join the Tea Party. A former member of the Spartacist League, a poet himself, said that this poem made him almost sympathise with "imperialists and captains of industry". Said poet is still very much on the left and the Spartacist League, whatever else may be said of them, and there's much that could be, are not generally known for sympathising with the likes of Cecil Rhodes and Henry Ford. 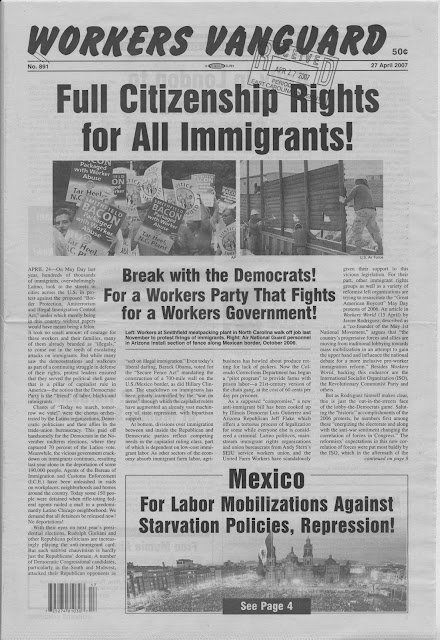 Rudyard Kipling was an imperialist and also an infinitely better poet than the author of 'Poem for the People'. Kipling's The White Man's Burden is, in everything it says, reactionary. But it's a work of genius compared to 'Poem for the People', because Kipling goes to the trouble, as every poet must, of finding his own new way of putting over his admittedly appalling ideas.

Dana Gioia is a more mediocre poet than Kipling was. He was a captain of industry for many years before he retired as a corporate executive at General Foods to write full time. George W. Bush appointed him Chair of the National Endowment for The Arts. 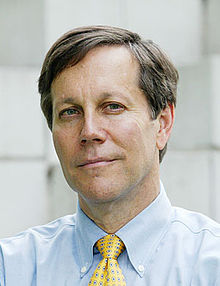 Gioia may be a lesser poet than Kipling. He is, though, Shakespeare, Goethe, T.S. Eliot, Emily Dickinson and Wallace Stevens rolled into one compared to the author of Poem for the People.

What does it say that poetry such as this could be promoted by a political movement initiated by Ken Loach?

At best, this type of lumpen doggerel is usually associated with lost causes fallen in love with their own defeat. At worst, it reeks of the rotten politics of those who herded the best of Russian Revolution into the Gulags and discredited socialism in the twentieth century.

If a new socialist movement is to have a cultural expression, which it inevitably will, then it absolutely can't be this sort of rubbish.
Posted by Jonathan Swift at 16:33