My ongoing love affair with the Governance & Legal Unit


Some of you will be familiar with this story. Last year, just after the Brexit referendum, I was suspended as a member of the British Labour Party which I had joined as an overseas member during the summer of 2015. I was born in the UK and so was entitled to join the party, which I did to support Jeremy Corbyn.

It's pretty clear that the reason for my suspension was that I write the wrong kind of poem. The British Labour Party's Governance and Legal Unit are not alone in thinking I write the wrong kind of poem. Many other people also hate my poetry. Generally speaking, I take this as a compliment and am happy to wallow in the hostility of people such as them. I can think of nothing worse than being the favoured poet of people who in Ireland think water charges were a fab idea, in America think Hilary was preferrable to Bernie, or in the U.K. think the Labour Party should concentrate on trying to win the votes of aspiring estate agents in Leamington Spa.

At the time of my suspention Left Futures ran a story about it, as did The Canary.

You can read these here and here.
Since last June I have inquired a number of times, via email, as to what the status of my suspension was. I received a ballot paper for the leadership and NEC elections last summer, but heard nothing more.

Then, the week before last, I received an email from a Louise Withers Green of the Labour Party's very official sounding Governance and Legal Unit informing me that I was ineligible for party membership as I had announced my intention to run as an Independent candidate for Mauchline Ward on East Ayrshire District Council. Ms Withers Green appeared to be operating under the misapprehension that I was a Mr David Shaw which I am not, and as far as I know, have never been.

I immediately emailed Ms Withers Green back saying that this was all very interesting but, as the man once said to Inspector Clouseau, "that is not my dog." I had never been to East Ayrshire and had no idea how to get there.

Then the real fun began. Ms Withers Green emailed me back the following morning saying that the earlier email had been sent to me in error, attaching the following letter. 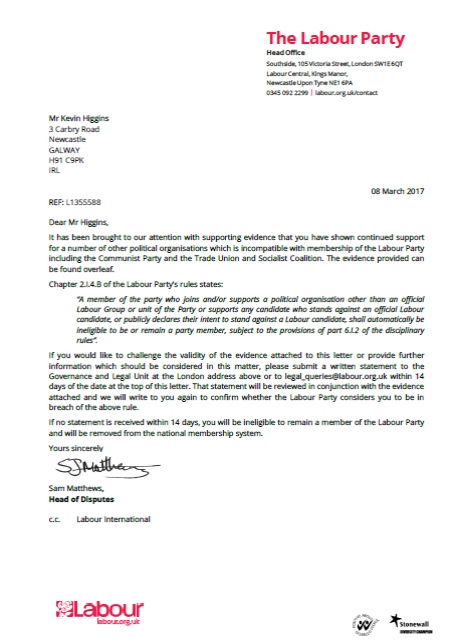 The evidence, which was also attached to Ms Louise Withers Green's email,  included the following items. 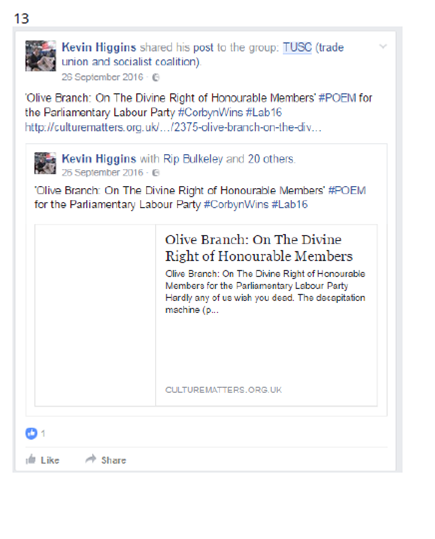 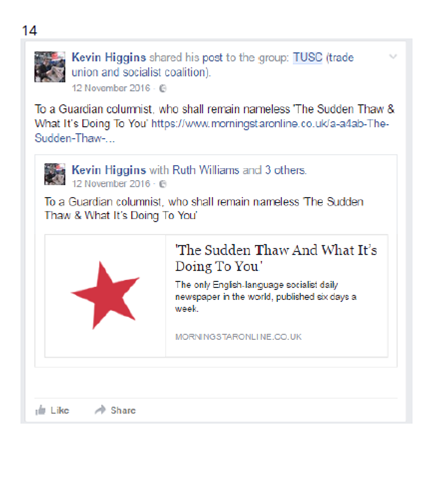 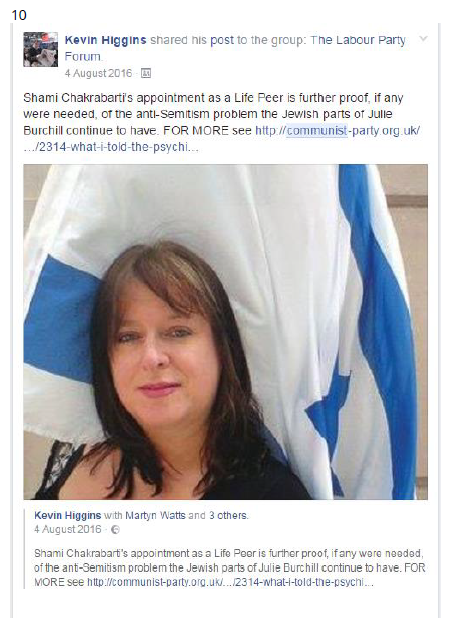 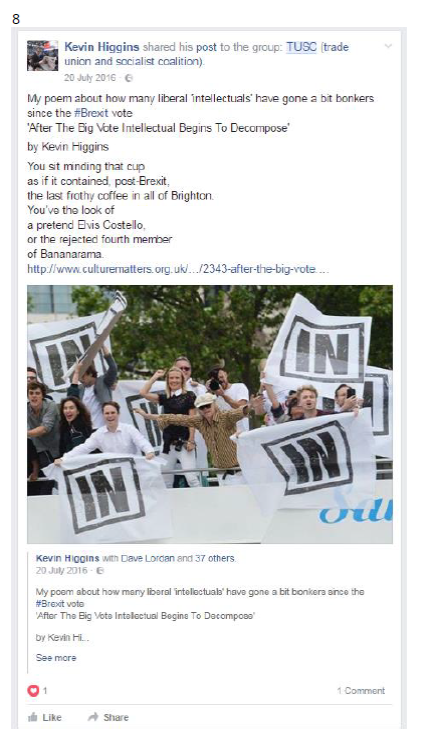 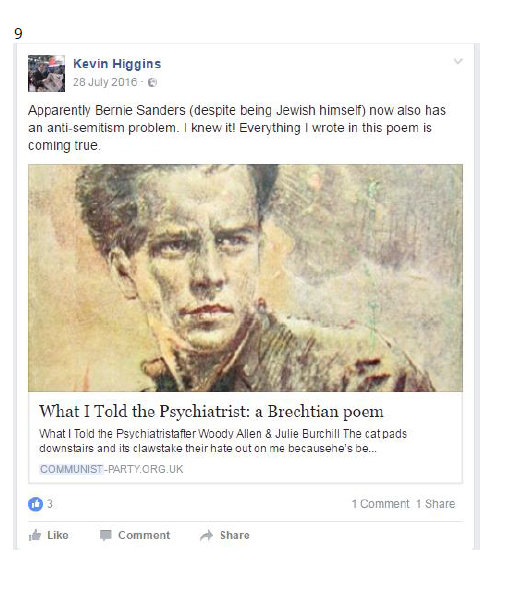 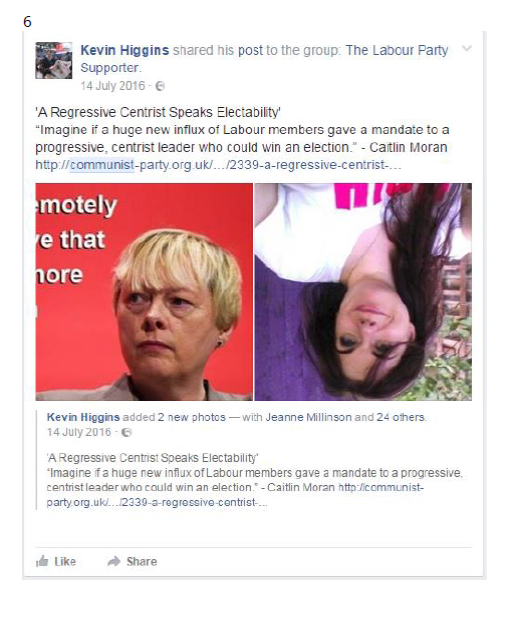 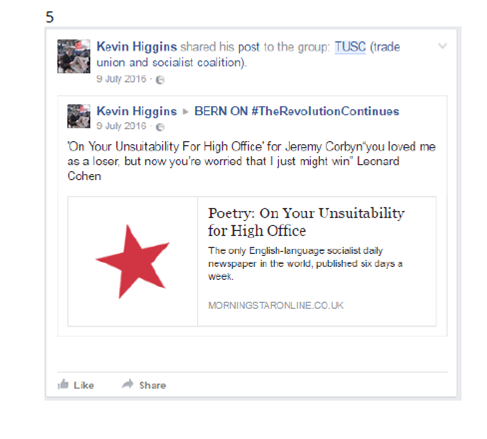 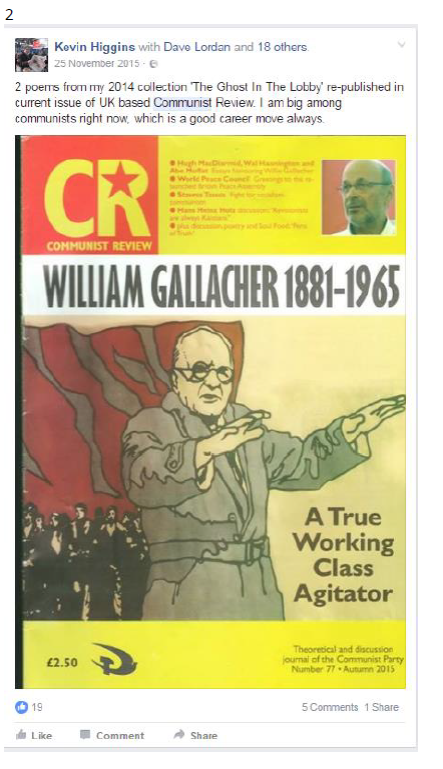 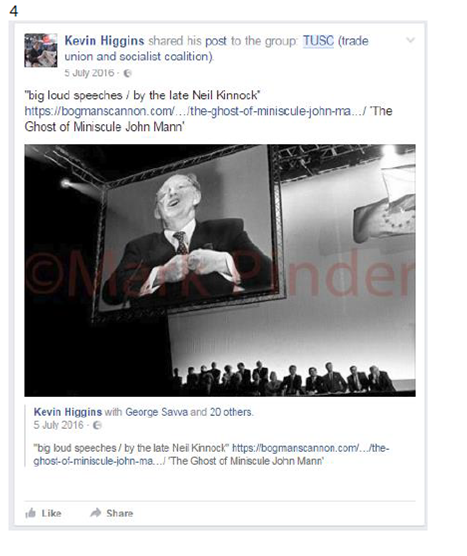 Of course none of this is really Ms Louise Withers Green's fault. It's the fault of the person who, ultimately, operates her, Labour Party General Secretary Ian McNichol, pictured below on a recent Labour Friends of Israel trip to Tel Aviv.
But the story isn't over yet. Just when I thought it couldn't get sillier it did.

Half an hour later the beleagured Ms Withers Green emailed me again to say that this letter (and the attached 15 pieces of evidence) had also been sent to me by mistake. It was, she said, an "administrative error" and I should ignore the whole thing.

Later that day I sent a data protection request asking to see ALL the documentation British Labour Party HQ has relating to me; it's clearly quite a file. I have heard nothing more so far.

There is one simple way the boys and the girls of the Labour Party's Legal and Governance Unit can solve at least a couple of the issues here.

I am inviting them all, including both Ian McNichol and Louise Withers Green, to attend either the Irish launch of my New and Selected poems which takes place as part of this year's Cúirt International Festival of Literature on Monday, April 24th, 7.30pm at the House Hotel, Galway OR the Southern England launch of the same book which takes place in Chichester on Thursday, May 4th, also starting 7.30pm. Both Mr McNichol and Ms Withers Green clearly need to buy a copy of my new book to see if I have in fact been (a) writing the wrong kind of poem and (b) been publishing them in the wrong kind of publications. The book will include an acknowledgments list of publications in which the poems in it were first published.

In the meantime I have written the script for a comedy series titled 'The Legal and Governance Unit' which I'm expecting will appear on the BBC in the autumn and will, I'm told, star Hugh Bonneville as Ian McNichol. 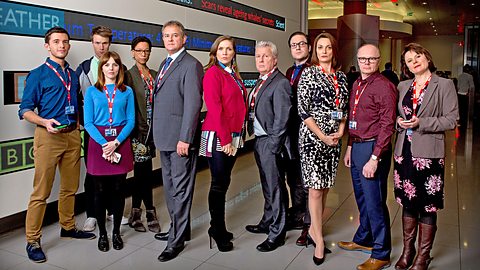 I haven't yet been told who will play me. But rumour is it's either Frankie Boyle or Ken Livingstone.
Posted by Jonathan Swift at 19:39

This month, to wide acclaim, the Irish government finally granted Travellers the status of an ethnic minority.

Rahoon is an area in Galway City which lent its name to ‘Rahoonery’ - see https://en.wiktionary.org/wiki/rahoonery - following a prolonged anti-Traveller  protest in the area in the late 1960s.

Cllr Peter Keane is a member of Galway City Council. Last week Cllr Keen's minions put a newsletter through every door in the area which appeared to some residents to be an effort to stir up a bit of latter day Rahoonery. Cllr. Keane turning up in this way is a little surprising as he represents the neighbouring ward and actually lives on Taylor’s Hill, traditionally the most exclusive street in Galway City.

As Cllr Keen is clearly in need of a creative writing class, I have gone to the trouble of rewriting the relevant part of his newsletter in order to make the meaning clearer for the common or garden gobshite. The Cookie Monster pyjamas referred to belong to me, Kevin Higgins. 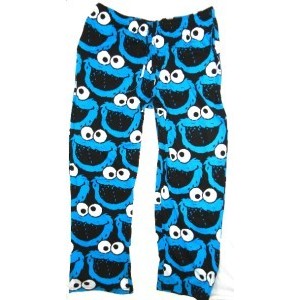 Cllr Keen’s original is below my rewrite. 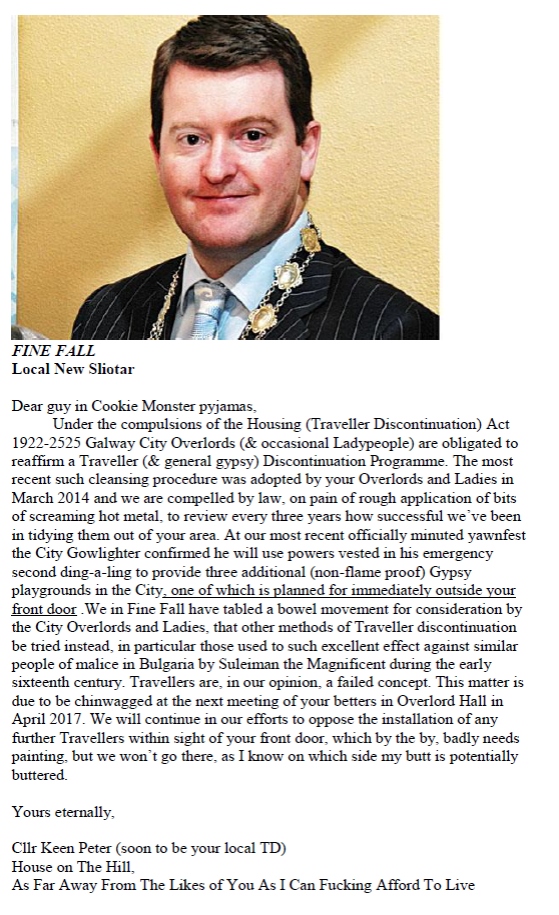 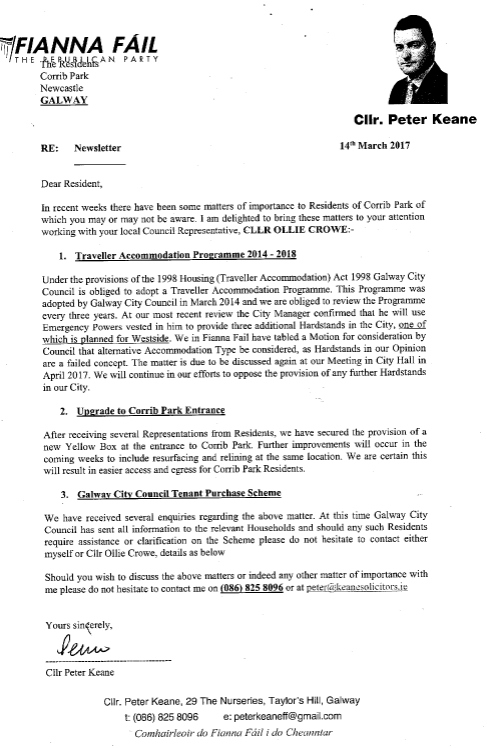